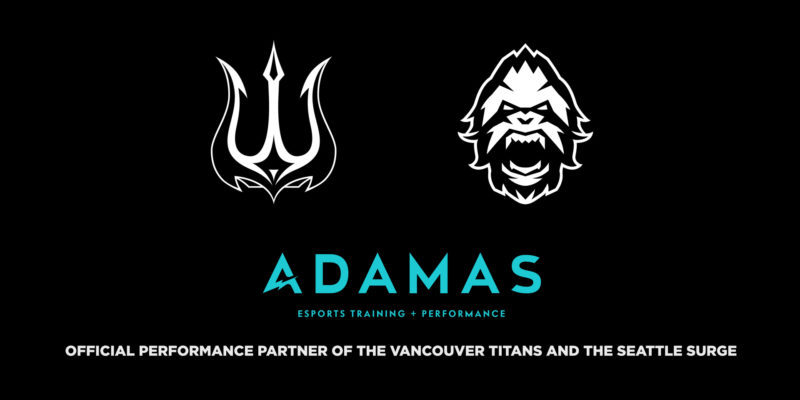 Canucks Sports & Entertainment has announced a new partnership with Adamas Esports Training + Performance. They will serve as the official performance partner of the Vancouver Titans and Seattle Surge. Adamas Esports Training + Performance is partnered with Fortius Sport & Health to provide world-class services and facilities. The Vancouver Titans will be using their facilities as their official home and training center for the 2020 season.

Adamas Esports Training + Performance will offer ongoing testing and monitoring to keep teams running at peak performance. The training facility staff will also be offering education about minimizing the stresses of demanding travel schedules for the players and coaches.

“Our team at Adamas is focused on defining the global standard for measuring and improving esports performance and a multi-year partnership with the Vancouver Titans and Seattle Surge is the perfect proving ground. This is a great opportunity to collaborate with a forward-thinking organization like Canucks Sports & Entertainment in an effort to help their athletes perform when it matters,” said Caleb Cousens, CEO of Adamas Esports Training + Performance, in a release.

Esports training facilities are becoming increasingly common as teams are able to raise more capital. For example, Team SoloMid announced in September last year they are building a US$13 million training center in LA. Previously, many teams had all their players living and practicing out of the same house to manage cost. Now that some teams have access to more resources, we’re seeing them opt for training facilities instead.

We’re excited to partner with Adamas Esports Training + Performance at Fortius Sport & Health to provide our Titans players and coaches with an all-encompassing environment to train and live during the busy esports season, including access to a state-of-the-art high-performance fitness center, a multi-disciplinary sports medicine clinic, a chef-inspired bistro, and much more.

Our goal in this partnership is to help the Titans and Surge reach not just their performance and championship aspirations but also their fitness and health goals. Through the expertise of staff and practitioners at Adamas and Fortius, our teams will be able to garner tips on how to best handle the various stresses that can arise in competing at the highest level in esports.

Given their traditional sports roots, it’s no surprise that Canucks Sports & Entertainment is so focused on high-performance training. After entering esports via a blockbuster merger last year, the company appears serious about winning and building championship-level teams. The Vancouver Titans made an impressive finals appearance last year in the Overwatch League. With access to world-class training, the Vancouver Titans and Seattle Surge will look to build on last year’s success.

[Editorial disclosure: Enthusiast Gaming which owns both the Vancouver Titans and Seattle Surge, is the parent company of Gaming Street.]